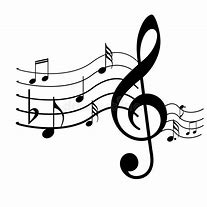 In term 6, the corridors of Moorlands have been awash with the sound of children singing and playing their instruments. Kick-started with, literally, a ‘BANG’ on Family Day, the STOMP Percussion Workshop saw children and their families from across Key Stage 2 take part in a 30-minute workshop where they were tasked with creating their own percussive masterpieces using a collection of cardboard tubes, old buckets and even cake tins – great fun!

Next, on a sunny afternoon in late June, the orchestra spent the whole afternoon in a workshop with Mr Parton. The 43 members worked tirelessly for the whole session to perfect their parts, coming together (after a crucial ice-lolly break!) to play through their pieces together ahead of the July showcase. 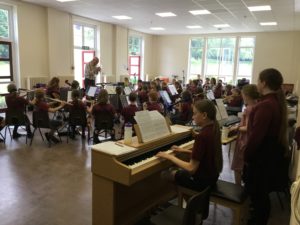 A first for Moorlands – June also saw our inaugural visit to The Orangery care home on Englishcombe Lane. As part of an initiative to develop links with our wider community, Mrs Chapman arranged for a small selection of musicians to perform. With the residents assembled in the atrium, we were all thrilled when the children began to play to see how the older people’s faces lit up as they listened to the various pieces being performed. Including violin, guitar, viola, flute, cello and cornet solos, the children were incredible ambassadors for our school and we already have a second visit planned.

Early July, saw the culmination of a term’s worth of hard work for our Year 1’s as they attended the ‘Sing As One’ festival at Widcombe Infants School. Bringing together year 1 children from across the city at 3 different locations, each year this festival of singing has a different theme. This year, the focus was Maths and as well as learning a number of communal songs, Moorlands’ children also sang their hearts out to their own original composition: ‘We Love Maths at Moorlands School‘ (set to the unmistakable tune of ‘Baby Shark‘!), plus each school was tasked with penning their own maths-themed verse to the tune of ‘She’ll be Coming Round the Mountain‘ – well done to Elizabeth in Dragonfly Class for coming up with Moorlands’ lyrics – a future song-writer in the making perhaps?

As well as being American Independence Day, Thursday 4th July saw Moorlands’ musicians come together to perform in their annual Showcase. A celebration children’s musical talents, the evening was once again a great success. Opening with a fabulous fanfare by our super team of cornet and trumpet players, the concert featured four pieces by the orchestra, including swing, rock and pop numbers, plus some really quite breath-taking solo and ensembles pieces. Highlights are too numerous to list however special mention should go to Alanna who picked up the prize for young musician of the year for all of her hard work, commitment and musicianship in both orchestra and the guitar group this year. Overall, we are thrilled and extremely grateful to report that we raised over £330 towards the continuation of Moorlands’ musical endeavours.

Whilst on the theme of the Showcase, we can also report that last year’s funds, in the interests of musical opportunities for all, were put specifically to providing a series of one-to-one drum tuition sessions – the results of which have been overwhelmingly positive. Thank you.

As we move towards the Summer break, we also can report the end of our first full year on the Bath Abbey Singing Programme. The Abby’s stated aim is to help children discover the pleasure of music and it’s many benefits; something we hope stays with them for the rest of their lives. Singing in a group has a positive impact on the children’s overall attitudes and behaviour, helping to build their confidence, concentration and teamwork skills and challenges them intellectually and musically. We have seen this impact first-hand most recently with the Year 3’s beautiful concert. There was not a dry-eye in the house as they sang their two-part harmony to ‘A Whole New World‘, nor as we said goodbye to our wonderful tutor Miriam who is emigrating to New Zealand! Not to despair though – the programme will be back in September with a new tutor as we look to creating our first, concert-standard school choir – more news to follow…

Finally, bringing to a close what has been a truly amazing term, the guys from Rock Steady once again treated us to their end of term concert. Every time the standard just keeps on going up, so much so, that with the sun shining and a gentle breeze blowing through the hall curtains, you could have been mistaken for thinking that you were at Glastonbury as the various groups, featuring children as young as seven years old took to the stage to perform songs by Fleetwood Mac, Lewis Capaldi and Tracy Chapman to name but a few. 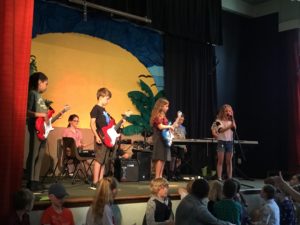 Moorlands certainly loves its music and we already can’t wait to see what September brings. Remember, if your child is interested in learning an instrument, anything from a cello to a cornet or a violin to a vibraphone, just drop Mrs Walker (swalker@moolands-school.com) a line for more details. If your child does already play, please do encourage them to keep up the practise over the Summer, even ten minutes a day can see children make great progress…